You are here: Home / Dinner / Creamy Onion Soup with Ham

This rich and savory creamy onion soup with ham tastes like a long simmered soup. It is so quick and easy enough for a weeknight meal, you will want to put it on your meal plan often! It's made lower carb by not using flour as a thickener in the recipe.

What ingredients are in this recipe?

What onions are best to use in this recipe?

Yellow onions are perfect for this soup. They are considered an all purpose onion because they are used in so many different recipes. Yellow onions actually get a bit sweeter the longer they are cooked. Huffington Post has a great article about choosing the perfect onion.

How to make Creamy Onion Soup with Ham?

How long will the soup keep?

You can store any leftovers in the refrigerator for 3-4 days. Just reheat on a low simmer on the stove. Due to the heavy cream, I don't recommend freezing the soup. Dairy tends to separate and get grainy when frozen.

This rich and savory creamy onion soup with ham tastes like it was simmered on the stove all day.  But it is quick and easy to make for a weeknight dinner.  It's also lower in carbs without any flour to thicken the soup.

* Sherry can be substituted with any dry red wine or a Port.

** If carb count isn't a concern, cornstarch or flour can be substituted to thicken the soup.

*** You can also use an immersion blender in the soup pot to puree the soup. 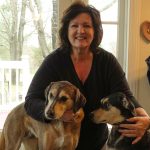 Hi Everyone! I'm so glad you have stopped in. You will find recipes for healthy, low carb and keto desserts and plenty of healthy dinners and comfort foods.  I will only post tried and true recipes because I'm picky about the flavor and success of the recipe and you should be too!   And most importantly, I'll share plenty of treat recipes for the precious pups in your life.
More About Me...